Doug Hepburn was one of the most accomplished strength athletes on the planet back in the day, winning gold medals at the 1953 World Weightlifting Championships and the 1954 British Empire Games.  With a world record press of 371.25 pounds, a 760 pound squat and a 580 pound touch n go bench press (among other feats) – he knew how to get strong.

The ‘Hepburn Method’ is a collection of training protocols that the big man himself is said to have used and recommended.

In his later years, Hepburn recommended again the addition of the ‘pump phase’, regarding it as simply too much work for one session. As someone who is currently utilising the Hepburn 8×2->8×3 progression, I would generally agree… you don’t feel like doing too much more of that movement afterward!

‘Program B’
Performed twice per week
Session 1: 4×1
Session 2: 5×1
Session 3: 6×1
Etc… until you are doing 10×1. At this point, you add 10 pounds and begin the program again. Alternatively, if you feel you are plateauing / cannot continue with this progression scheme, then you can switch into the A program or the pump program.

Hepburn was known for his ‘don’t half ass two things, whole ass one thing’ training approach. He would rather hit a few movements really hard and well, than split his volume up over five different things per day. I think this form of training economy is very valuable, perhaps not 100% of the time but the general idea of ‘give less things more effort’ would serve almost anyone very well.

You can see that all the Hepburn training protocols have progression built in – you add a rep per session, you add 5-10 pounds (or 2.5-5kg) per training cycle. Because it’s a very gradual increase (literally one rep at a time), it’s not intimidating nor is it unachievable. You don’t look at it and think ‘aw shit, better take three scoops of preworkout for this one’.

So if you’re sick of using a % based program or simply want a change of pace – give one of old mate Doug Hepburns regimes a try. He was a big strong man, one of the greats, and knew a thing or two. 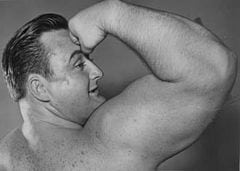